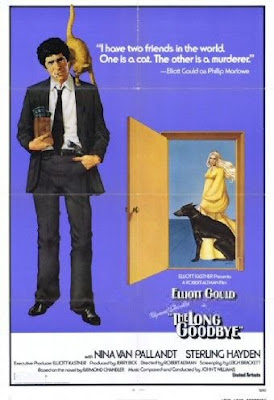 On Saturday March 3rd from 12:30pm to 3:30pm, please come join me for my next workshop at the Central Sierra Arts Council - and my favorite film of all time (it has some competition, but I really love this movie): Robert Altman’s astonishing, groundbreaking, quirky, funny, sometimes dark, mostly mysterious, semi-gangster, semi-whodunit, always entertaining and fun 1973 adaptation of Raymond Chandler’s classic Philip Marlowe novel, The Long Goodbye.


(One of the major innovations of the film is that it is set in the 1970s, and not the 40s or 50s like other classic Chandler and hard-boiled detective movies such as The Maltese Falcon.)

I love this film for too many reasons to list here, and it has had a vast influence on both my life and my writing. (See my earlier blog post, Why I Love Robert Altman's The Long Goodbye, for some sense of my passion.)

Both the book (written in 1953) and the movie (filmed 20 years later, but somehow in a different universe) made me fall in love with Los Angeles and California…with a dream of a corrupt, complex, exotic city in which a not-always-ahead-of-the-game private detective named Philip Marlowe navigated a path that was both a part of the world around him and yet was also subtly moral and compassionate.

Raymond Chandler was an American writer who went to a small British private college (Dulwich College) and brought to American detective/pulp/noir fiction a quality that some critics regarded as “chivalry” – the quality King Arthur’s knights possessed, the dream of pursuing a noble end no matter what the cost, be it great danger or even death.

Robert Altman was an American filmmaker who redefined what could be done with narrative and character, starting with the seemingly chaotic but carefully scripted (and carefully improvised at times) chaos of the movie M*A*S*H, then on through beautiful films like McCabe & Mrs Miller and Nashville…and The Long Goodbye.

He worked very carefully with his writers and his actors, from whom he would often draw a great deal of material (but it was usually then incorporated into the script rather than simply improvised) – and he took great chances with overlapping dialogue (because that was how he believed people spoke in reality) and complex narratives that intervwove many storylines and sometimes seemed meandering – but in fact were very tightly and cleverly constructed so that all the elements came together, as they do with huge success in The Long Goodbye.

Robert Altman’s The Long Goodbye was written by Leigh Brackett, a successful author herself in the 1940s (primarily of science fiction!), who adapted the Raymond Chandler novel, The Big Sleep, alongside no less than William Faulkner, for the 1946 film classic starring Humphrey Bogart and Lauren Bacall.

She also worked on Rio Bravo and – after The Long Goodbye – on Star Wars: Episode V: The Empire Strikes Back (actually the second Star Wars movie, made in 1979), but one of her greatest contributions to The Long Goodbye was writing an ending that is as true to the spirit of Raymond Chandler and Philip Marlowe as it is possible to be…and yet is also astonishingly daring.  Altman made including this ending in the film a condition of his contract!


Please join me on Saturday March 3rd from 12:30pm to 3:30pm to watch all of Robert Altman’s The Long Goodbye (thanks to our wonderful new projector, which in turn is thanks to our group member and benefactor, Ridge Schneider of Sonora Subaru) – and then to talk about why I think this is such a valuable film to study, in terms of what can be done with story and character and making something your own…and so much more.

PLEASE NOTE THAT THIS IS, FOR ALMOST ITS ENTIRETY, AN OFFBEAT, ODDLY AMUSING APPROACH TO A DETECTIVE FILM, WITHOUT GUNS AND WITHOUT VIOLENCE.  HOWEVER, AT ONE KEY POINT IN THE FILM, THERE IS A SCENE OF SUDDEN AND CONSIDERABLE VIOLENCE.  I HOPE THIS WILL NOT DISTURB ANYONE – IT IS CENTRAL TO THE NARRATIVE AND IS OVER WITHIN ABOUT 30 SECONDS.  THERE IS ONE OTHER SCENE INVOLVING A GUN, BUT IT IS HIGHLY RELEVANT AND LESS DISTURBING THAN ANYTHING YOU WOULD SEE ON TV.