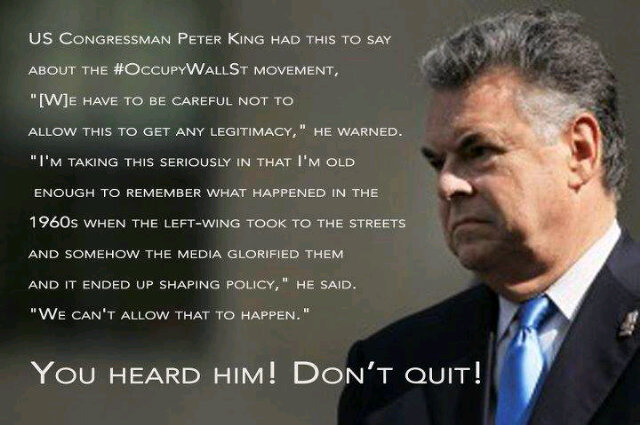 I love this statement by Republican congressman (New York's 3rd district) Peter King about the rapidly growing #OccupyWallStreet movement - because everything he says makes me love it all the more and proves him to be such a Dick...Cheney.

As anyone who has seen my Twitter feed would know, I have been following the Occupy Wall Street and other Occupy events across the country (see map below) and think they are the most exciting thing that has happened in US politics in years (although I still think that President Obama being elected was a pretty monumental step in itself).

I think we should all let the Occupy movement grow: give it space to find its feet, make statements, contradict those statements, find leaders, find different leaders, make mistakes, do whatever it takes to make the "I am the 99%" slogan ring out across America.

And to those who say these demonstrators don't want to work (hey, there are so many jobs out there right now!) or that by using iPhones and technology and electricity and eating food, they are hypocrites, because those of are the products of corporate America - BULL****!

Those are the products of the hard work - or labor (to use a word that scares the Right) - of working Americans (or in the case of so many corporations who farm the work out overseas, hardworking foreigners) and anyway in a struggle against the greed and complacency and failure to act of and against the banks, the Republicans and corporate America in general, any tool is a good tool - a smartphone, a shovel, a pen.

Just in passing, while these lazy, good-for-nothings were protesting about the rip-off that is Wall Street and its cronies in Washington, didn't Bank of America (a bank that may well need a big bailout pretty soon), just pay one of its former executives a severance package of six million dollars (or possibly a total of ten million dollars, according to Bloomberg.com)? 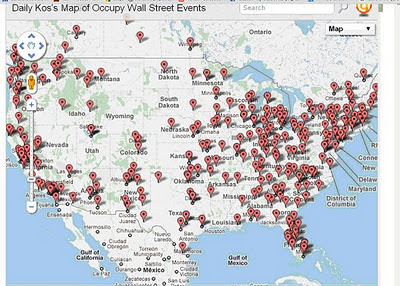