"Our Lake" - A Wonderful Father-Son Morning

August 11, 2011
This morning Hudson and I got up early and decided spontaneously to go out on the lake in our friend, Steve Stewart's electric motor boat (the only kind of of powered craft allowed on the lake). Steve is a friend and neighbor and has been incredibly kind and generous about letting us use his boats since we moved here.

It was a beautiful summer's August morning, just cool enough to be comfortable before the sun's heat really dug in, and we felt great as we pushed off and navigated some pretty thick weed close to the shore.

Out on the water, there was silence and the kind of calm that too few seven year olds can appreciate fully - but Hudson likes quiet and stillness as much as I do, and we both enjoyed the fact that we were the only people out on the lake.

We had to stop from time to time to clear weeds from the propeller, but that only added to the sense of peace.

Hudson steered the boat expertly toward the reeds at the far end of the lake, and we decided to go a little way up the small river that feeds it. We knew the weeds there would be even thicker and we probably wouldn't be able to go too far, but the river is quite beautiful and full of birds that fly all around you as you approach. 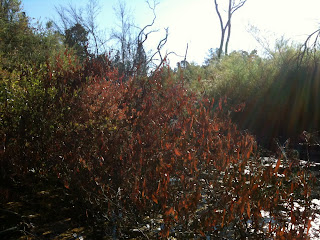 So we took the boat up as far as we could easily go, came to a spectacular reddish-colored tree that grows across the water and decided to turn back. It is possible to go past that point but we wanted to keep things simple - and as it was, we had to paddle the boat free of the roots and branches to turn it around safely.

Back on the lake, the sun was already beginning to get hot. We let the boat head fairly slowly back toward the shore, enjoying the stillness and quiet that still filled the air - then anchored the boat and headed back home, arriving before Mama and Paradise were even awake.

It was a wonderful start to the day, and a powerful though almost wordless father-son time spent between us. Hudson had been shooting some video footage in the boat at intervals, and within an hour of returning home, he had edited and assembled a 30 minute film of our spontaneous voyage using iMovie and iDVD. He called it simply, "Our Lake."

The War Zone Message Board - Something Remarkable

October 28, 2012
Lara Belmont and Ray Winstone in The War Zone. Thirteen years ago, when the film of my novel The War Zone was released, something remarkable occurred: a film and a book about incest gave birth to an online message board, The War Zone Message Board , intended for survivors of incest and abuse, and all who wished to discuss relevant topics in an empathetic manner. It is not a fan site for either the book or the film. It is moderated by volunteers - currently two young women called Nath and Norie - who give freely of their time to insure that those who wish to give voice to their feelings, or to find solace or help or support from others, may do so. Some of the people involved call themselves "zoners," which for me is something quite remarkable and humbling: that a novel I first started thinking about almost 30 years ago, and a film that Tim Roth directed so stunningly 13 years ago, should spawn its own support system for those caught up in the horrifying world we r
1 comment
Read more