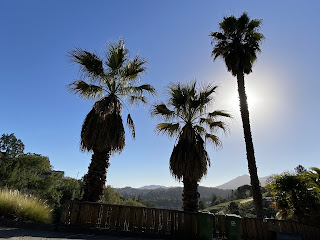 I haven’t posted to this blog for so long that I thought I should at least note the year, 2021, and the fact that America is breathing again after four years of madness.

I can barely begin to communicate the relief I feel with Joe Biden as President, and Kamala Harris as Vice President, but this photograph, taken during a drive up into the hills around our house on Inauguration Day, captures a tiny part of it.

The battery in one of our cars was flat after covid disuse, and after a jump start, I drove into the hills with no plan other than to try to give the battery a little charge.

The day was warm (Wednesday, January 20th), I had the windows down, and I just meandered, following my instinct, rather than any particular geography.

I had NPR playing, and the realization that the hell of Trump was over, came like the warm breeze through the windows and the beautiful hills and winding roads ahead of me.

I believe that Biden and Harris will prove to be surprisingly progressive and effective, hopefully a mix of FDR and LBJ at their best.

I’m sure they have a far more certain sense of direction than I had that day, but a little meandering is useful sometimes, because you chance upon hidden treasures, and perhaps radically new ideas.

In any case, I am thrilled that we have a new direction as a nation, and if by some miracle (given the craven cowardice of most of the Republican half of the Senate), we can convict Trump for inciting the bloody insurrection of 1/6 and disqualify him from ever holding office again, I feel that America will be a safer democracy going forward.

While always accepting the immense challenges we face, and the harsh realities of governing, my hopes are high.

December 26, 2011
The Malteste Falcon, 1941. For those of you wishing to keep up to date on my writing workshops at the Central Sierra Arts Council , the most efficient way is to sign up in the "Follow This Blog By Email" box in the right sidebar beneath the Buddha. You will then receive an email update every time I post to the blog, including any changes in times or dates or other details of the workshops (although I shall try not to mix things around). I would also greatly appreciate it if you would "Like" this blog on Facebook , by clicking on the "Like" button also beneath the Buddha. This lets you follow the Facebook page associated with this wesbite, AlexanderStuart.com , which frequently has additional content not included in the blog. Blade Runner, 1982, courtesy of artist Gavin J Rothery. In the meantime, the first Writing Workshop of the New Year will be on Saturday January 21st 2012 , at the Central Sierra Arts Council, 193 S. Washington Str
Post a Comment
Read more