Sofia Coppola's Somewhere - My Film of the Year 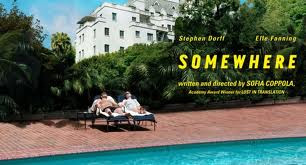 Sofia Coppola’s Somewhere is a rare jewel in this year’s crop of movies: a film that actually made me feel and think about the characters, a film that mesmerized me with its stillness and its quietness, a film that I know I will return to, for its haunting mix of loneliness and the gentle love that family can offer.

A highly personal film rather than simply an autobiographical one (Woody Allen’s Manhattan comes to mind as a reference, not in terms of feel but in how that movie reflected both his love of New York and foreshadowed his relationship with a much younger woman), Somewhere draws a deeply shadowed yet highly subtle portrait of a celebrity-scored father-daughter relationship.
The father, superbly played by Stephen Dorff, is a not-quite-A-list movie star, Johnny Marco, who spends much of the movie holed up in LA’s wonderfully atmospheric and unique Chateau Marmont hotel.  There, he mixes empty and quite movingly lonely sexual encounters (including a series of almost identical pole dances in his room that have a post-post-Fellini bizarreness to them) with time spent with his eleven year old daughter, Cleo (Elle Fanning; more about her in a moment) – whose quiet maturity seems totally earned and not in the least precocious, and is the glue that holds both Marco’s life and the film together.
While there are echoes of Coppola’s wonderful Lost In Translation in this setup –and in the film’s isolated environment of hotels and cars (Milan’s luxurious Hotel Principe Di Savoia provides a lush interlude from the Chateau) – Somewhere is an even braver movie, exchanging the always engaging yet sardonic Bull Murray for a performance by Stephen Dorff that brings to mind the alienation of Antonioni and Kubrick.
There are two scenes in particular, both nods to 2001, that strikingly portray not just Marco’s/Dorff’s shipwrecked status as a character, but his intimations of mortality.
One has him sitting motionless while latex (or the like) is applied over his entire head for a special effects mask that will be used in one of the films he makes that we never even glimpse.
Once the application is complete, he is left alone in silence (save for a distant ringing phone), an amorphous blob of a head distinguished only by nose holes, his labored breathing amplified to resemble that of the astronauts in 2001 – particularly the sequence where HAL’s (the ship’s computer’s) brain is disassembled, just as Marco’s life is being disassembled here.
The second scene is a simple shot of Johnny Marco eating breakfast alone at the Chateau Marmont.  Its framing, I am certain, is intended to echo the cosmic isolation of the astronaut at the end of 2001, eating and living out his days in an alien-designed Louis Quinze “hotel suite” in space…doubtless if Sofia Coppola were an alien designing an environment for a human, she would pick much the same decor!
If Somewhere sounds bleak, it might have been were it not for its sly humor (in one scene Marco actually falls asleep during semi-anonymous sex, so routine is it for him) and the extraordinary humanity brought by Elle Fanning, as Marco’s daughter, Cleo.
In a performance as delicately shaded as Dorff’s (which says much about Coppola’s direction of actors), Fanning conjures an eleven year old who seems both an utterly normal LA pre-teen (I hate the word, “tween”!) and at the same time a girl who is convincingly comfortable around the trappings of celebrity success – hotel living, slightly flirtatious adult “friends of your father,” limos, press conferences and a somewhat Fellini-esque movie premiere in Italy.
Very little is explained – at least in dialogue or exposition – in the relationship between Cleo and her dad, but the unforced warmth and evident strains of their relationship say everything.
In particular, the reproving glance that Cleo gives Marco at the hotel in Milan, after an unwelcome breakfast encounter with one of Marco’s seemingly endless flow of meaningless, glamorous lovers, says everything – as does the pained, and perhaps at last conscious look with which Marco responds.
It is tempting to see in this father-daughter portrait a personal expose of Sofia Coppola’s relationship with her own celebrity (and cinematic guru) father, Francis Ford Coppola, but I suspect she has been more subtle than that.
While Cleo is dealing with both an absent father and mother (here it is Marco’s ex-wife, Layla, played by Lala Sloatman), just as Coppola herself was forced to do at points in her young life, Somewhere feels too authentically a work of art to be straight-up autobiography.
I can imagine her showing it to her parents (Francis Ford Coppola is one of the executive producers, and Sofia’s brother Roman is a producer), and their complex recognition of aspects of themselves – but also of sufficient distance in the fictionalization of Marco, Cleo and Layla to make it bearable, and to make them proud.
While Somewhere probably won’t achieve the commercial heft of Lost In Translation, it marks a maturing of Sofia Coppola’s already unique talent.  I have long been an admirer and think she is one of the most groundbreaking filmmakers of the past decade, with a voice as distinctive and courageous as Wong Kar-Wai or Paul Thomas Anderson.
Hopefully the film will attract Oscar attention, not least for Stephen Dorff’s and Elle Fanning’s greatly underplayed yet endearing performances and also for Coppola’s screenplay and direction.
Its pace and subtlety are far removed from most films of the moment, but like the more reflective films of the 1970s that clearly influenced Sofia Coppola, Somewhere is that rare movie that allows you time to form your own thoughts while watching it, rather than being hand-fed from one effects-laden “big moment” to the next.
Watch the trailer for Sofia Coppola's Somewhere: