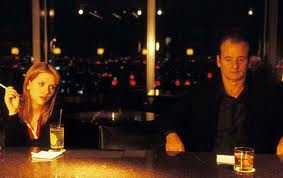 I love the films of Sofia Coppola - I think she is one of the most truly original and gifted filmmakers of her generation, with a unique personal vision quite different from her father's or any of her contemporaries.

Since The Virgin Suicides, through the stunning Lost in Translation (Bill Murray's best performance, even including the unforgettable Groundhog Day), and including Marie Antoinette - which I loved for its pure surface-quality and removed sense of being in the Royal Palace, almost totally unaware of the French Revolution unfolding outside (while listening to Bow Wow Wow, of course!) - Sofia Coppola has created haunting, dreamlike works that, to my mind, are like a kind of post-modern "world-suburb" alienation akin to Antonioni at his finest.

Her vision may to some extent be privileged, it may have something to do with Warhol's love of surface (she sat upon his knee as a child at family gatherings), but it is unique and just as meaningful as the grit of a low budget indie movie or the beautifully photographed violence and squalor of a film as extraordinary as City of God. It shares some of the highly personal, deeply nostalgic romance of another of my absolute favorite contemporary filmmakers, Wong Kar Wai (In The Mood For Love, possibly my favorite film of all time, and 2046). It also reminds me of my favorite quote from Raymond Chandler (from memory, it was in his Notebooks but I can't find it anywhere on the web, so this may not be 100% accurate):


"I prefer tinsel to gold, because tinsel has all the qualities of gold but it also has pathos."
This is all by way of congratulating Sofia Coppola on her triumph at this year's Venice Film Festival, where last night she won the top prize, the Golden Lion (sadly not the Tinsel Lion!), for her latest film, Somewhere, which is inspired by her own childhood relationship with her father, Francis Ford Coppola.

The report below is from Britain's Guardian newspaper, and includes a roundup of other festival winners, too:

The film, starring Stephen Dorff and Elle Fanning, was something of a surprise winner and not without controversy. It received mixed reviews here on the Lido but jury president Quentin Tarantino said it had been an unanimous decision from a jury that included screenwriter Guillermo Arriaga, composer Danny Elfman and director Arnaud Desplechin. "It enchanted us from the first," said Tarantino, "and it grew and grew in our hearts, in our analysis, in our minds and affections. "We kept coming back to it in discussions, even when talking about other films, because we found it kept illustrating what we were looking for in the winner of our Golden Lion."

Coppola collected the award herself, receiving it from her former boyfriend Tarantino. "I'm so proud to win the Golden Lion," she said, thanking her father "for teaching me". She said he and her mother were watching the ceremony on television at home in Napa, California. Before the festival began, Tarantino had been asked about the ethics of judging a film from a close friend. Defending himself from any accusations of favouritism, he said: "That wasn't difficult at all. Being her friend didn't affect me or make me sway the jury in any way.

"Sure, I created guidelines but she won it fair and square and unanimously. "The other members of the Jury don't know her at all. They just loved the film. We kept coming back to it, as one of us said, because 'it's a great fucking movie,' all right?" Other surprising awards went to actor Vincent Gallo for his performance as a fugitive Afghan terrorist in Essential Killing.

Best Actress went to Ariane Labed for Greek comedy Attenberg in which she played a young woman obsessed with the documentaries of Sir David Attenborough, whose mispronounced name forms the film's title. Another big success was Spanish film maker Alex de la Iglesia, who won two awards, for best screenplay and best director, for his extraordinary film about a rampaging clown, The Last Circus. Although the fourth woman to win the Golden Lion, Coppola's win struck another blow for her gender in the same year as Kathryn Bigelow became the first woman director to win an Oscar. "Since I started making films, there have been more and more women directors coming through," she told The Observer later. "It can only be good that there are different stories being told from different points of view."

On the same day, actress Helen Mirren took on one of the great Shakespearean male roles as Prospero in The Tempest, dedicating her performance to the world's oppressed women.